–
Baghdad’s catastrophic hospital fire is part of a larger trend of oxygen-rich environments fueling fires at hospitals around the world. A lack of code compliance remains the underlying issue.

On Saturday, at least 82 people died and hundreds more were injured when smoke and flames tore through a hospital treating COVID-19 patients in Baghdad, Iraq. More are reportedly expected to die as they succumb to severe burn injuries.

The blaze started after an oxygen tank caught fire and exploded, the New York Times reported. Officials say an investigation has begun into why the facility lacked fire sprinklers and alarms, and whether oxygen cylinders were being stored improperly. No cause of the fire has been reported yet, but a statement released by Iraq Prime Minister Mustafa al-Kadhimi hinted toward electrical deficiencies at similar facilities throughout the Middle Eastern country. “Go and check every single wire in every office and hospital,” the statement said, according to the Wall Street Journal.

The incident builds on a deadly trend: As the coronavirus pandemic has driven the need for supplemental oxygen at hospitals worldwide, the incidence of fires at these facilities has increased. According to a bulletin released by the European Commission’s Joint Research Centre (JRC) in January, oxygen-rich environments have played a role in at least 20 fires at hospitals treating COVID-19 patients since the pandemic began in the spring of 2020.

“Although many hospitals successfully responded to such incidents and avoided injury, most events still required evacuation of staff and severely ill patients, while at the same time depriving oxygen ventilation to those in critical condition for the duration of the event,” the bulletin said.

While COVID-19 has led to an increased use of oxygen in many hospitals, thereby increasing the fire risk, experts say the root of the issue lies in a lack of code use or compliance—the same factor that’s been driving the international hospital fire problem since well before the pandemic gripped the globe.

“Local building codes and international codes and standard, such as those offered by NFPA, can solve all these issues,” said Hemant Khadse, CEO of India-based fire protection consulting agency East Corp Group. “Societal awareness of codes and code enforcement needs to improve. People are reactive in nature, but they need to become more proactive when it comes to life safety.”

Oxygen and other hazards

While oxygen itself is not considered a flammable gas, it is an oxidizer, which means it can cause a fire to spread easier and faster.

Fires made worse by high levels of oxygen in health care settings have traditionally been associated with operating rooms, where oxygen and other oxidizers like nitrous oxide are routinely administered to patients. “Emphasis on oxygen delivery is critical not only because of increasing flammability but also because of increased rates of injury when operating close to an oxygen source,” a study published last year in the journal Anesthesiology reads.

According to the JRC, the coronavirus pandemic has compounded the issue by dramatically increasing the need for oxygen at hospitals, especially in intensive care units and emergency rooms. “Due to the increased number of oxygen ventilators … the oxygen concentration is more readily elevated,” the research group said, adding that a seemingly slight rise in the oxygen concentration in air from a natural 21 percent to 24 percent is enough to introduce a risk. “Given that infectious units have a low air exchange rate with the outside environment by design, the potential for a dangerous oxygen-rich environment is increased.”

Codes and standards like NFPA 99, Health Care Facilities Code, and NFPA 53, Recommended Practice on Materials, Equipment, and Systems Used in Oxygen-Enriched Atmospheres, provide guidance on the safe storage, handling, and administration of medical gases like oxygen and nitrous oxide. These include, for instance, “having a dedicated storage space or having some pretty significant separation from combustible materials, so even if we have a leak in oxygen and we were creating an oxygen-enriched atmosphere, it would diffuse some before coming into contact with combustibles,” said Jon Hart, a technical services lead at NFPA.

But in countries where code adoption or compliance isn’t strong, safeguards may be lacking. A 2014 study published in the Journal of Clinical Anesthesia, for example, found that many hospital fires in India occur in oxygen-rich environments. Even so, according to the study’s authors, “very few of these hospitals are aware of the existence of any international codes and standards for oxygen handling.”

In India, Khadse said COVID has not only led to more oxygen use, but that use is also occurring in facilities that may have been constructed or modified “hurriedly … and without any life safety review.” There have been “dozens” of fires in India over the past several months, he said.

“Apart from the large quantity of oxygen cylinders at these hospitals that help the spread of fire, loose electrical wiring, electrical load imbalancing, and malfunction of appliances are some other reasons for these fires,” Khadse said. Then, he added, poor smoke management infrastructure leads to the spread of smoke and, ultimately, deaths.

Like Khadse, Jim Pauley, NFPA president and CEO, believes the use of current codes and standards can go a long way toward addressing the fire, electrical, and other life safety hazards that exist in hospitals worldwide. “Safety is a system that should be taken very seriously, especially in hospitals where many occupants will be unable to evacuate on their own or without assistive equipment,” Pauley told FSAI Journal, the magazine of the Fire & Security Association of India, for an article published in March. “Standards that pertain to health care facilities can be a tremendous resource around the globe.” He specifically referenced NFPA 99, NFPA 110, Standard for Emergency and Standby Power Systems, and NFPA 101®, Life Safety Code®.

Overall, a review of media reports conducted by NFPA Journal shows that at least 170 people have died in hospital fires since the COVID-19 pandemic began in the spring of 2020. Oxygen-rich environments are just one of many factors that have led to poor outcomes in these incidents, which have occurred worldwide, from India to Russia to Brazil. No incidents have been reported in the United States, however. 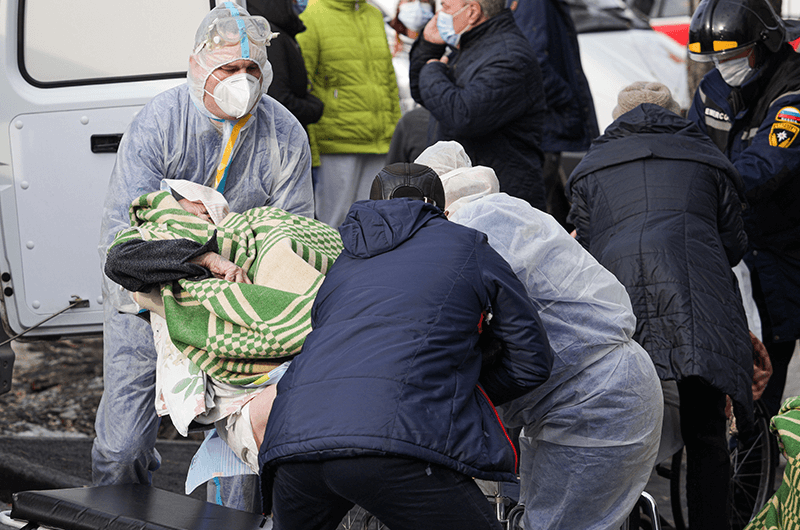 First responders evacuate patients from a hospital in Russia, after a fire broke out there in October. (Getty Images)

Jamie Gutierrez, NFPA’s international development director for Latin America, shed light on this in a blog he wrote in February, in response to a string of COVID-19 hospital fires in Latin America.

“Each of these events shares a common thread—ignorance or dismissal of danger signs, panic reactions, or stampede tendencies,” Gutierrez wrote. “The incidents also showed inappropriate use of flammable and toxic materials, the absence or ineffectiveness of basic security measures, deficiencies in regulatory framework, and a concerning lack of training in evacuation planning, among other proactive safety measures. All of these safety components and a few others need to be addressed if we are going to reduce risk.”