Last fall, the utility Pacific Gas & Electric (PG&E) cut electricity to millions of customers in Northern California, part of a series of planned shutdowns designed to reduce the risk of wildfires. Seasonal high winds can damage power lines and spark fires—electrical transmission lines belonging to PG&E were blamed for the 2018 Camp Fire, the deadliest fire in California’s history—and utilities are increasingly taking the extreme step of turning off the power when conditions are at their most hazardous.

But hitting the off switch to so many people carries significant risk, especially for people dependent on durable medical equipment, or DME. This is the term used for medical equipment that patients use in their homes to maintain optimal health—oxygen concentrators, continuous positive airway pressure machines, ventilators, intravenous infusion pumps, suction pumps, electric beds, and more. Almost all of it runs on electricity, and patients could be at grave risk if there are no alternate power plans in place.

That discussion came to a head in October following the death of a 67-year-old California man who was dependent on an electrically powered oxygen machine. The man suffered from pulmonary disease and congestive heart failure, and died minutes after PG&E, responding to high winds and the threat of wildfire, cut power to the area that included his daughter’s home, where he was living. The man’s family maintained that his death was the result of the power outage, but an autopsy gave the cause of death as artery atherosclerosis, and the county coroner did not hold PG&E responsible.

Regardless, the incident highlighted the potential risks faced by elderly or disabled people who rely on DME. According to the Office of the Assistant Secretary for Preparedness & Response, approximately 2.5 million people covered under Medicare in the United States use some form of DME. (The number of DME users covered by other programs such as Medicaid, private-pay insurance, and Veterans Administration programs is unknown.) Some DME may be equipped with backup battery power, but that source typically only lasts a few hours.

The future belongs to DME

In recent years, the health care industry has experienced a profound shift, where a greater emphasis is placed on controlling patient health rather than reacting to crises, and where the delivery of care has moved from hospitals and doctors’ offices to patients’ homes.

DME fits squarely into this trend. It makes sense for health care organizations looking to reduce overhead and operational responsibilities. It appeals to insurers, who end up paying less in premiums. And it can be an enormous benefit for patients hoping to save money on medical expenses. Some studies show that patient healing is also enhanced while being treated or recovering in familiar surroundings. Considering these benefits, it’s safe to say that DME’s role as an integral component in modern health care will only continue to grow.

That’s why ensuring the safety of patients reliant on DME needs to be a priority among emergency managers and for anyone responsible for policy planning. Power loss can stem from a natural disaster, power grid issues, or intentional controlled power outages; jurisdictional emergency plans need to account for any kind of outage, and they need to include methods for identifying the most vulnerable residents who rely on DME.

At least one effort exists that can help. A program called emPOWER, devised by the US Department of Health and Human Services, uses the Medicare claims database to identify patients who utilize DME. That information can be used to create detailed emergency plans; for example, a plan could specify the evacuation of a particular patient, if possible, and relocation to a health care facility with a backup power system. Other plans may call for checking in on patients who have a generator or other means that enable them to defend in place. The latter option may be a better strategy in some cases, if relocating patients is impractical due to their condition, the environmental situation, the resources available at the time, and the logistics associated with moving patients and multiple pieces of DME. The emPOWER database can also be used by utility companies to prioritize power restoration efforts, and by emergency managers to focus their response resources. 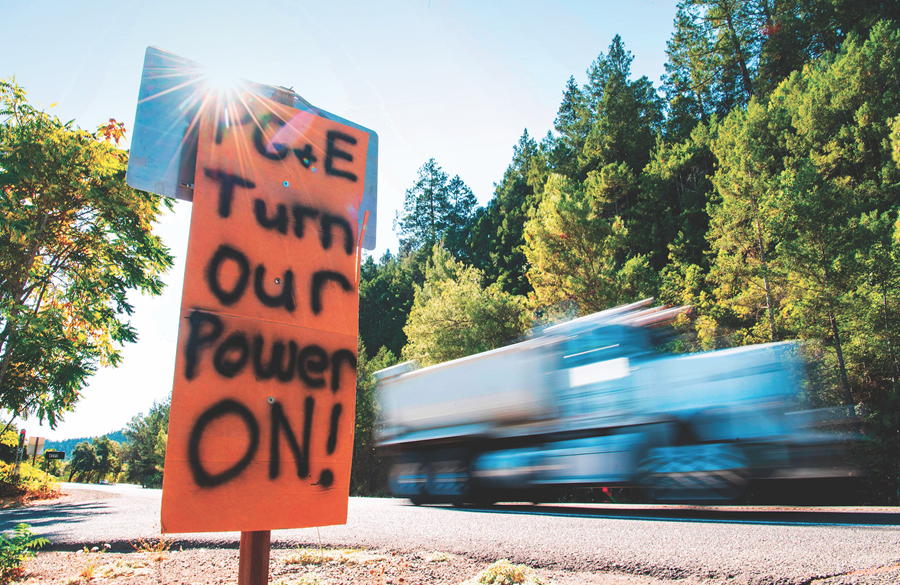 POWER STRUGGLE Pacific Gas & Electric’s decision to start cutting electricity to customers in California, in an effort to mitigate the risk of power lines sparking wildfires, has been met with widespread criticism. (Getty Images)

NFPA is also working on the problem. In June, NFPA held an event at the Massachusetts Institute of Technology to discuss today’s resilient power supply system and potential issues for patients that use DME. NFPA staff members were joined by representatives from the health care industry, the energy sector, the US Department of Veterans Affairs, and several other organizations. Our discussion included a pair of common methods for supplying backup power: generators and combination solar/energy storage systems (ESS). Generators, it was noted, have their limitations, as the equipment must be maintained and refueled, can be noisy, and is likely to produce pollutants. Solar and battery storage systems may be a good option, it was determined, but the cost can be prohibitive, especially for low-income patients. Key findings were shared in a report by the Clean Energy Group, an event participant, available at nfpa.org/dispatches.

NFPA recognizes there is also a need to address resilient power for DME in its codes and standards. To that end, the National Electrical Code® (NEC®) Correlating Committee is currently forming a task group to examine how the current requirements in the NEC should be managed for DME. The objective will be to determine if changes need to be made to the code to address the interface criteria between alternate power sources and the distribution system for the DME. Additionally, NFPA 110, Standard for Emergency and Standby Power Systems, and the new NFPA 855, Standard for the Installation of Stationary Energy Storage Systems, may also play a role in addressing DME resiliency. Those documents will need to be reviewed to determine how their requirements can further support the infrastructure for DME.

NFPA 99, Health Care Facilities Code, already contains requirements for patient care, electrical appliances, and equipment, but the current application of NFPA 99 excludes home health care and contains no requirements for DME. The Correlating Committee on Health Care Facilities is exploring the possibility of addressing home health care and DME in the 2023 edition of the code.

Addressing resiliency issues around DME in emergency management protocols is essential to protect some of the most vulnerable people in our communities, people whose numbers will only increase through demographic shifts and the continued evolution of the health care industry. Forward-thinking collaborations, along with the development of codes and standards that provide benchmarks for safety, will help ensure that these people remain safe the next time power is compromised, whatever the reason—weather events, power outages, or forced shutdowns.