The Hazards of Combustible Dust

–
After a fatal blast in Singapore, an NFPA expert discusses the hazards of combustible dust and how to prevent fires and explosions

Three people were killed and seven more were injured in an explosion at an industrial manufacturing plant in Tuas, Singapore, last week. According to local media reports, the incident was the result of a combustible dust explosion involving potato starch powder that the plant used in its industrial processes.

“It is a known scientific fact that … materials in powder form can be explosive when dispersed over the air, especially when they are in an enclosed environment,” Silas Sng, commissioner of Singapore’s Workplace Safety and Health division, told Channel News Asia.

Just over a week after the fatal blast, Singapore government officials announced they would begin inspecting hundreds of companies for conditions that could lead to a similar accident. “Given the severity of the accident, [the Singapore Ministry of Manpower] urges all companies working with similar combustible powders to review their safety procedures, especially to ensure dust does not accumulate in an enclosed environment,” Zaqy Mohamad, senior minister of state for the Ministry of Manpower (MOM), wrote on Facebook. “Our officers will step up enforcement of such workplaces, in order to avoid a similar accident from occurring. MOM will not hesitate to take strict enforcement actions against companies who fail to implement proper safety measures.”

Each year, hundreds of similar incidents occur across the globe. In the wake of last week’s incident, NFPA Journal spoke with NFPA hazardous chemicals engineer Alexander Ing about combustible dust explosions and the resources that are available to prevent them.

First off, what kinds of materials can lead to combustible dust explosions?

Combustible dusts are finely divided solids and are created by taking a solid material and breaking it down into smaller pieces. This is commonplace in a number of different industries, such as metal manufacturing, where you’re chipping and grinding things. It’s found in chemical processing, where you’re using raw materials and turning them into plastics, for instance. It’s part of agricultural processes, such as taking grain or a product like potatoes and turning them into a flour or powder.

There’s a concept known as the dust explosion pentagon. What is that?

The dust explosion pentagon is an expansion of the fire triangle as it relates to dust. The fire triangle starts with fuel, oxygen, and an ignition source. So if you have these three elements at the same time, you can get a fire. For example, if I have a pile of material such as potato starch and it’s exposed to a sufficient ignition source, I can get a fire along the top of that pile because that’s where the surface area of the potato starch interacts with oxygen and can react. Now, if I take that same pile and disperse it in the air, I can get a flash fire off of that. Now if I take that pile and disperse it in a closed room, I get confinement, which allows pressure to build as the gases rapidly expand during the reaction. That’s when you get an explosion, which is kind of a bursting of that confinement.

So a dust explosion can occur if you have the three elements of the fire triangle—fuel, oxygen, and an ignition source—plus dispersion and confinement. 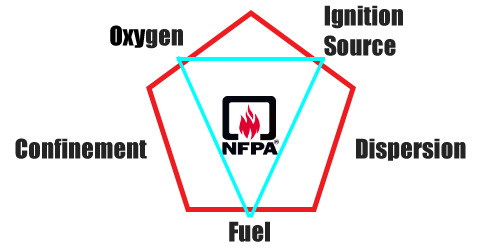 Do we have any idea how common these incidents are globally?

In 2019, the US alone experienced over 200 dust fires or explosions, according to data collected from media reports. Over 100 such incidents were reported outside the US. They’re not necessarily unique to one region or one industry. There are many different industries and many different processes around the world that can experience these dust fire or explosion hazards. So it’s not necessarily confined to a new or developing region or developed country versus non-developed country. All of these countries or all these regions can experience a dust fire or explosion if the hazard is not properly managed.

And in terms of managing the hazard, what are some NFPA resources that exist for preventing combustible dust explosions?

In general, what are some of the protection measures these standards outline?

While the specific protection measures vary for each type of dust commodity, the general approach focuses on what is referred to as the three Cs—contain, capture, and clean. You want to first try to contain your dust within your process equipment. Anywhere you can’t contain your dust to your process equipment, you want to try and capture it at the point of release with something like a dust collection system. Lastly, anywhere you can’t contain or capture it, you want to clean up the remaining dust so it doesn’t pose a hazard.