–
An extensive research project measures the impact of common storage facility obstructions on ESFR sprinklers, data that could inform changes to NFPA 13

There’s a joke in the sprinkler and storage industries that you don’t design an early suppression fast response (ESFR) sprinkler system around a building—you design the building around the ESFR sprinkler system.

The joke illustrates the importance of ESFR systems in protecting an array of high-challenge storage settings, as well as the numerous considerations involved with installing these systems in a storage facility—especially when the installation encounters potential sprinkler obstructions. ESFR systems utilize fast-acting, high-volume sprinklers designed to protect the most challenging stored goods, including items containing large amounts of highly combustible plastics. The current edition of NFPA 13, Standard for the Installation of Sprinkler Systems, includes a number of restrictions that apply to ESFR installations, including the proximity of the sprinklers to nearby obstructions that can include structural elements, duct work, and lighting. Those restrictions have generated concerns among stakeholders over the years, many of them focused on a central question: Exactly how much do nearby obstructions impact the performance of ESFR sprinkler systems?

A new report by the Fire Protection Research Foundation (FPRF) offers answers. The 160-page “Obstructions and Early Suppression Fast Response Sprinklers,” published in August, summarizes six years of research conducted by Wiss, Janney, Elstner Associates, Inc., the global engineering/architectural firm that partnered with the FPRF on this project. The research evaluated the potential impact of obstructions on the performance of ESFR sprinklers during fires. The project also resulted in an analytical tool that can simplify the decision-making process for the placement of ESFR sprinklers in relation to various obstruction configurations and sizes.

The findings could have important ramifications for NFPA 13 and for the stakeholders who rely on it. Data collected from the ESFR obstruction research is being reviewed by the NFPA 13 Technical Committee as part of its discussions for possible changes to the 2022 edition of the standard. The committee has discussed modifying existing requirements and adding new provisions in Chapter 14 to address isolated and continuous obstructions below ESFR sprinklers.

ESFR sprinklers are the heavy hitters of the sprinkler world in three important ways: they are designed to activate quickly in order to achieve full suppression of a fire; they create large water droplets that resist evaporation on their way to the seat of a fire; and they release an immense amount of water to aid in suppression. Imagine driving through a rain shower that your wipers can handle easily: that’s the output of a typical sprinkler. Then imagine driving in the kind of deluge where you can hardly see beyond your windshield, one so intense that you have to pull over and wait for it to pass: that’s an ESFR sprinkler. Depending on the storage scenario, ESFR sprinklers can eliminate the need for in-rack sprinklers. 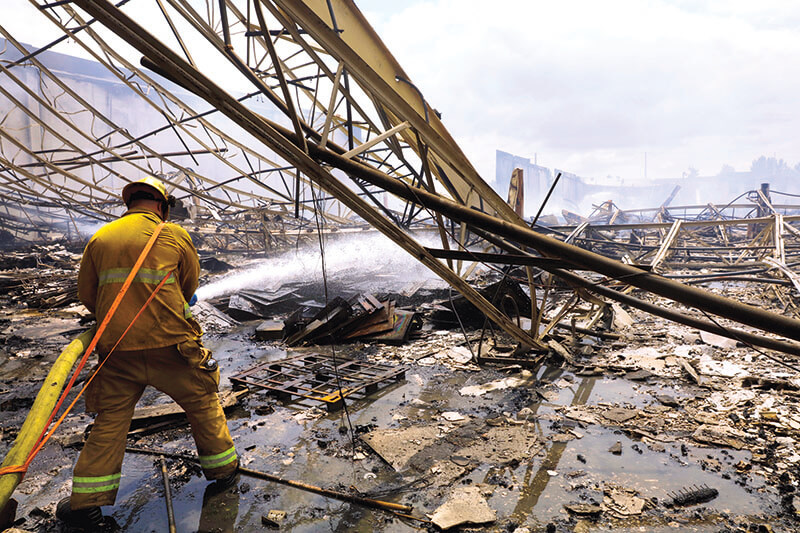 Despite that power, NFPA 13 contains a number of strict provisions for installing ESFR sprinkler systems, in part because of the hazardous nature of the materials those systems are designed to protect, and because the systems can be designed to achieve full extinguishment of a fire. An array of building components, from structural elements including beams and columns to features such as ductwork, smoke vents, lighting, and skylights, can all impact the position and spacing of ESFR sprinklers. According to NFPA 13, the options for installing ESFR sprinklers near obstructions are limited to adding another sprinkler below the obstruction or removing the obstruction altogether—thus the joke that it’s easier to construct the building around the sprinkler system. As the authors write in the new FPRF report, the requirements in the current edition of NFPA 13 “are considered conservative and have created difficulties in practical application.”

To address concerns over the perceived limitations imposed by NFPA 13, the FPRF proposed an ambitious research project to study the impact of various obstructions on the effectiveness of ESFR sprinklers. The project, which began in 2014, contained multiple phases, including a literature review, a research planning and development phase, and an extensive testing phase that included nine full-scale tests conducted at Underwriters Laboratories’ large-scale fire test facility in Northbrook, Illinois.

The project defined a testing scope that researchers determined would be the most useful for the broadest range of warehouse storage occupancies. According to the report, survey results of NFPA 13 users worldwide indicated that open web steel joists are the most commonly used structural roof system, and that bridging members, which provide lateral support for maintaining stability under vertical loads, are the most problematic obstruction for ESFR sprinklers. The survey also found that the depths of the steel joists most commonly used range from 22 inches to 36 inches. The top chord of an open web steel truss is typically located above the sprinkler pattern discharge and does not present as much of a concern as the bottom chord, which resembles an unattached flat horizontal obstruction that is 4.5–5.5 inches wide.

A testing method known as actual delivered density, or ADD—a tool commonly used for sprinkler listings and approvals—was used to evaluate specific aspects of ESFR sprinklers and how they are affected by obstructions. Using the ADD testing apparatus, a fire source simulated a rack storage fire, and collection pans were used to collect water into cylinders below the apparatus. Sprinklers could be positioned directly over, centered between, or offset from the centerline of the fire source. The vertical position of the sprinkler relative to the top of the ADD apparatus replicated the distance from the top of the storage array to the ceiling sprinkler location. Once the fire reached a steady-state burning condition, the pump controlling water flow to the open sprinkler was activated to produce the desired sprinkler discharge pressure. Data was collected and recorded for each collection pan, and averages were calculated based on areas of interest and the associated obstruction. Sixty-five ADD tests were conducted as part of this research.

While ADD testing does not account for every variable, the methodology identified trends such as how various k-factors, as well as horizontal and vertical offsets of the ESFR sprinklers, impact the amount of water that can reach the fire. These factors were then used to select nine full-scale test scenarios for K-17 sprinklers, which analyzed joist obstructions with various depths and distances to the sprinkler deflector, as well as bridging members and flat obstructions.

These findings could influence the provisions of NFPA 13 related to ESFR sprinkler installations, which in turn could have a game-changing impact on stakeholders throughout the industry.

While the NFPA 13 Technical Committee hasn’t officially completed the revision cycle for the 2022 edition of the standard, if these findings are applied to NFPA 13 they would improve some of the installation restrictions and allow ESFR sprinklers to be located closer to obstructions. Such changes would reduce the challenges designers currently face by maintaining appropriate sprinkler spacing while offering new approaches to common obstructions. One of the authors of the FPRF report recently gave a virtual presentation on the findings to the NFPA 13 Technical Committee, and committee members indicated that they agreed with the research.

To follow the progress of the upcoming edition of NFPA 13, visit nfpa.org/13next.